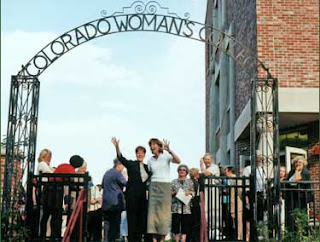 Opened: Incorporated 1888, opened for classes in 1909. First accredited as the Colorado Woman's College in 1932.

Closed: 1982, when the assets were sold to the University of Denver

The Colorado Woman’s College (the name by which the school was originally known) was founded in 1888 by the Reverend Robert Cameron, the pastor of Denver's First Baptist Church. Rev. Cameron, it was said,  wanted to open a women's college in the western United States that would be equivalent to Vassar College in terms of prestige and academic offerings. (Vassar, a women's college founded in 1861--and my own alma mater--went coed in 1969.)  The College opened its doors to its first students as a two-year college in 1909, with enrollment at 59 students its first year. Over the next ten years it changed into a four-year institution, and offered both BS and BA degrees. 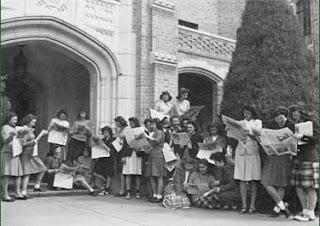 The 1920s and the 1930s brought change to the campus as two more buildings, the Foote and Porter Halls, were constructed. Meanwhile, the Colorado Woman’s College once again became a two-year institution. In 1932, the college received accreditation by the North Central Association. It would maintain its accreditation over the entirety of its academic life span.

By 1967, enrollment at the Colorado Woman’s College reached over 1,000 students and it switched back to being a four-year institution.


It was also around this time--in 1966--that the school underwent a second name change: to Temple Buell College. This was in honor of local Denver architect, developer, and philanthropist Temple Hoyne Buell (1895-1990), who had made a $25 million gift to the college. Ironically, the name change had the effect of decreasing overall alumae giving, as the name change angered and alienated many old grads.

Turns out that this was something of a double irony, as the Buell "gift" turned out to be nothing more than a legacy (or endowment trust) in Buell's will. As the New York Times stated in Buell's January 1990 obituary,


In the 1960's Mr. Buell announced a $25 million donation to Colorado Women's College, which renamed itself Temple Buell College. The money was to be presented posthumously, but other donors, apparently unaware of this, stopped contributions. The trustees decided to refuse the gift and resumed the old name.

Except that the old name was resumed with a slight twist. As the Colorado Women's College Alumnae Association explains,

After the Temple Buell College era (1966 - 1973), the board of trustees voted to revise the use of "woman" in the college name to "women" to emphasize the purpose of CWC - to educate many women.

Personally, I find a certain degree of irony in the fact that Temple Buell made his fortune by building regional shopping centers in old "swamplands." Tease out that metaphor as you will.


Like many other women's colleges, Colorado Woman's College (I'm sticking to the original name here) was fond of traditions and rituals that forged students into a larger sisterhood. One of the most charming was the Rose Dinner & Walkout:

The school year officially began with the Rose Dinner. Each year upperclassmen were "big sisters" to the new students. The Big Sisters invited their Little Sisters to the dinner, where they were welcomed to the campus and life at CWC. The ceremony was marked by the underclass women receiving a yellow rose from their big sister.

The candle-lit Walkout ceremony followed the dinner. The student body president led the procession of new students through the CWC arch in front of Treat Hall. Freshmen were forbidden to walk through the arch until they were led through by the senior class. At that time, they were allowed to remove their beanies and become official members of the college community. (We didn't have beanies in the 1970s.)

After the procession through the arch, the upperclassmen lit the candles of the freshmen and the school song was sung.

Later in the evening, there was a student rally in the student union where dorm songs and cheers were performed with each dorm trying to drown out rival dorms!

So what happened to this college? Here's the more-or-less official explanation:

By the late 1970s, the college had experienced continued falling enrollment and funding, with higher education specialist Gary A. Knight deeming the college "financially desperate" and lacking enough prospective students, the "lifeblood" of the college, to sustain itself. In 1982, CWC's assets were sold to the University of Denver, a private university that opened The Women's College of the University of Denver that same year. The campus was home to the Women's College until 2001, when it became home to the Denver campus of Johnson & Wales University two years after the initial purchase was made.

The shorter explanation? The College was mismanaged.