This is actually a bar I remember personally. My friend Bonnie and I would sometimes make the haul down to New York for dinner and a trip to the Duchess. Ah, the good old days....

A gay history timeline for Greenwich/West Village says this about the Duchess:

1980    Popular late '70s/early '80s lesbian hangout Duchess (101 Seventh Ave. South at Grove St.) begins coming under attack from state liquor license inspectors, reportedly refused service after they charmed the bartender with refrains of "Come on girlie, give us a drink."

One hundred-one Seventh Avenue South was a famous lesbian bar called the Duchess, until then-mayor Ed Koch took its liquor license away in the 80s by using the anti-discrimination laws against it, effectively closing it down.

Interesting paradox here, in that Ed Koch was widely rumored to be a closeted gay man--even in the day. Of course with his recent death, the rumors flew once again.

Christopher Bram gives us a more recent history by simply describing the tenants of his apartment building on Perry Street over the last thirty years, and, in his introduction, some of the changes the rest of the Village has undergone. Take, for example, the genealogy of a lesbian bar called The Grove. The Grove amounted to salvation for the Scottish mystery writer Val McDermid when she came to New York from a country where there were no bars for women, much less anything like the Village. The Grove, which later became the Duchess, Bram tells us, is now a vitamin store.

It appears the former vitamin store is now a cupcake place. The beat goes on....
Posted by ANONYMOUS at 7:18 PM No comments:

Gay Bars Fort Lauderdale is pretty much to the point. Cloud Nine Lounge is a "Lesbian Neighborhood Bar, Mixed Crowd."

From SouthFlorida.com: "Cloud 9 offers entertainment and mingling for gay women in South Florida."

And from lesbian night life:

Run by women for women, this lounge features two pool tables, dartboards, and beer-pong tables, a dance floor with a pole and a friendly staff.

Cloud 9 is lesbian hangout that's also the kind of place you turn to for good conversation -- and when you're in need of a stripper pole. The understated interior is disguised by a generically painted/decorated exterior that might lead many a passerby to drive on, ignorant of the genial friendliness inside... And of the amateur strip contests like Dare 2 Bare.

This description is derived from a longer piece (by a dude) on Cloud Nine published on November 15, 2007:

You can learn a lot about women at Cloud 9 Lounge, a local's bar in Davie where on many nights the majority of the patrons are lesbians. Cloud 9, with its many faces, can act like a dive bar one night, then put on its dancing shoes and act like a naughty schoolgirl on her way to the sock hop the next night. Cloud 9 is not exclusive. It doesn't pretend. It's functional — two bars, three pool tables, TVs, a dance floor, a stage, and, oh yeah, a stripper's pole. And it's the kind of place you turn to for good conversation. The understated interior is disguised by a generically painted/decorated exterior that might lead many a passerby to drive on, ignorant of the genial friendliness inside, ignorant of the stage with the stripper's pole and the few of us guys taking notes. What we're learning is that too often, guys neglect these good traits (functionality, good conversation, humility) for the sake of being a hunter. For the sake of being a "man." You see, here, the hunt is futile, making for excellent practice on how to become better-rounded. Social classroom or not, after a few Corazon tequila shots, it's still a bar (full of women) famous for its amateur strip contests, like this week's Dare 2 Bare, in which someone will take home $150. Friday is ladies night, which means $5 Jäger bombs. On Saturdays, get $3 Long Island iced teas and get spun by DJ Buttafingaz all night.

So are the ones from the yellow pages:

From December 2007: "Regulars and bar staff alike are always happy to see you and are friendly. just soak up the good vibe. There are some interesting house specials. it feels inviting."


From February 2011: "Although my recent visit to Cloud 9 was during the morning, as one of the few places open during those hours, I could tell it was a cool place to hang out anytime, 24/7....The people and staff were friendly, so it was naturally inviting. Yes, this bar is known to be a favorite of a certain type of female, but who cares?....everyone is there to have a good time, and so will you."

Yelp features four later reviews, though, and all of them are pretty negative.

By 2010 - 2011, a lot of problems with general quality were apparently starting to develop at Cloud Nine.

Admittedly, some complaints were of the whiny variety--the "eh" music that was too "ghetto" along with the empty dance floor. That the bartender had an "attitude" and "dressed like an early 90s stripper- not cute."

But not all of the complaints were whiny or minor. For example, we're informed that the bathrooms were both "disgusting" and "horrifying." And it sure sounds like they were.

From July 2011: "One toilet had no seat, and the other was covered in vomit.  Ugh. I probably get herpes just thinking about this place."

In addition, we now had lots of boundary problems with men--a sign of incompetent and/or indifferent management, particularly at a bar that identifies itself as a place for lesbians.

From July 2011:  "The locals were a small handful of local lesbians, and a TON of straight guys, just staring at them (and us).  Not exactly what I want in a bar.  I'm all for mixed crowds, and I rarely enjoy all-lesbian clubs. But cmon guys, don't come just to stare.... pick  your jaws up off the floor, and stop being creepy."

From September 2010: "I was excited to go here because it was a "club" and so close to home. It was when I arrived when I began to have a mood change. This is a lesbian lounge but obviously you dont have to be homosexual to go. There is not girls all up on each other it is just a place to hang out. The crowd was mostly black, not that this is a bad thing but my friends and I received faces as if saying, "what are you doing here?"

According to jumponmarkslist, Cloud Nine is now closed, but no date is given. However, the last visit regarding health code violations was April 2012 (the reported violations started in November 2010, which more or less coincides with the beginning of the poor customer reviews).
Posted by ANONYMOUS at 7:54 PM No comments:

Opened: The Hotel Ritz opened in 1898, the Hotel's first bar (the male-only bar known as Bar Cambon) opened in 1921. When the Ritz Ladies' Bar opened is not real clear, but it apparently began its life as the ladies waiting room next to to the Bar Cambon.

Closed: What is now known as the Ritz Bar (the bar that was formerly the male-only Bar Cambon) went coed in 1936.  The Ladies' Bar then became Le Petit Bar, and then Bar Hemingway. The Hotel Ritz (along with all its bars) closed for a two-year renovation project in 2012.

This is yet another case of pure serendipity. I stumbled upon this story about the Hotel Ritz Ladies' Bar in an old newspaper article published in the Oelwein [Iowa] Daily Register, May 9, 1931. The context was the opening of a new movie, Fifty Million Frenchmen. This is some of what it said: 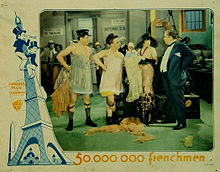 When "steam room" is mentioned it brings to the average mind a picture of a Turkish Bath with sheeted figures wiping dripping brows in a dense fog. But to a Parisian, the steam room spells something entirely different--the ladies' bar!

Jed Kiley, prominent figure in Paris night life, owner of Cafe Boulevardier, and more recently technical director on Warner Bros. production "Fifty Million Frenchmen," showing at the Galaxy Theatre, Sunday and Monday, coined the phrase. He called the ladies' bar a steam room because at the cocktail hour in Paris, it is so hot and bothered with cigarette smoke that it resembles a steam room. The name stuck and from then on the women's salon of the bar was the "steam room."

An exact duplicate of the Ritz bar in Paris with its accompanying steam room was built on the Warner Bros. lot for the making of this rollicking farce adapted from the stage play of the same name.

From what I can tell, the men's bar began in 1921. It was initially known as the Cambon Bar because the entrance was just inside the Hotel's Rue Cambon entrance.

Just opposite the bar was a very small 'salon de correspondance' with lovely wooden walls. This became the ladies' waiting room, where ladies waiting for their husbands would while away the 'minutes'. (Ladies, at this time, were not allowed in the bars.) In 1936 the principal bar was transformed to receive both sexes, and at the same time a second bar was created. This was 'Le Petit Bar', over which Bernard 'Bertin' Azimont was to preside until his retirement in 1975. The little bar was to become Ernest Hemingway's favourite haunt. He had discovered the Ritz Paris in 1925 after meeting Scott Fitzgerald in the 'Dixies Bar', a drinking hole for ex-patriot American artists and writers. The Dixies no longer exists, but Le Petit Bar, now known as the Bar Hemingway, continues to thrive.

If you watch the first few minutes of 50 Million Frenchmen, you get a rare glimpse into how these various male and female spaces functioned within a high-class hotel of that era. I'm not going to summarize the whole film, but it begins with an American man managing to steal a Frenchwoman's money. She tracks him down to the Ritz Hotel bar, which is obviously male only. She barges in anyway in order to confront the man. The men within the bar treat her with utter derision and contempt. We later see a small sign by the entrance which states that ladies are not admitted. However, we see gentlemen passing in and out of the so-called Ladies Bar with no problems at all. In fact, there are at least as many men in the Ladies Bar as ladies.

This conforms with what many women observed during that time period. And it's the same double standard regarding boundary enforcement that we still see around womyn's spaces today.
Posted by ANONYMOUS at 7:58 PM 1 comment: