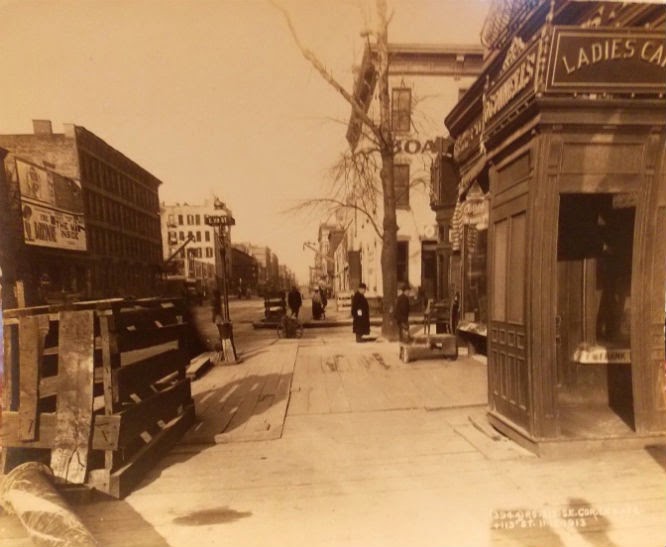 Happened to find this photo at Harlem World Magazine. The Ladies Café is to the right. I have briefly looked around, but can't find out what the name of this place might have been much less any advertisements for the place. Still, photos of ladies restaurants and cafes are comparatively rare, so this is a nice find. This is what was said about the photo:

The image was taken looking north on Lexington Avenue, the corner of 119th Street with construction underway to the left on top of that the photographers head and camera are in the right hand corner. Above that is the Ladies Cafe in the right side of the image. As we move to the middle of the photograph two gentlemen stand and talk as other Harlemites walk up Lexington Avenue towards 125th Street.

Posted by ANONYMOUS at 9:55 AM No comments:

From Placing Memory and Remembering Place in Canada:

The Coral Reef, however, was a main lesbian bar in Ottawa in the 1970s. A Caribbean club located on Sparks Street from 1962 to 1968, the Coral Reef became a gay and lesbian bar in 1968 when one of the owners, a lesbian, was convinced by a friend to open its doors to the gay community. According to Homer, an owner of the Coral Reef, the bar was a "gay bar" on Monday, Tuesday, and Wednesday and a black/Latin club on Thursday, Friday, and Saturday. When people who went to the Coral Reef from Thursday to Saturday became aware of its "gay nights," they stopped coming to the Reef. At this point, the switch in 1968 to a gay/lesbian bar every day of the week was complete, with regular drag shows. The sheer number of women attending on Thursday nights prompted Homer to mark Friday night as lesbian nights too.

When asked whether civil servants were among the people who held membership cards to the club (obligatory in the 1970s), Homer responded that most of the women worked for the government in some capacity, making a point to mention that in the 1970s coming down to the Coral Reef (twenty-one steps to the basement) was a risky trip for these civil servants.

There's also this description in a 2006 Daily Xtra article:

When the bar [Coral Reef] opened in the late 1960s, times were changing. Canadian society was loosening its restrictions. Then-justice minister -- and soon to be prime minister -- Pierre Elliott Trudeau was moving to decriminalize homosexuality. Peace, love, granola and Joni Mitchell and Neil Young were "in" and traditional Bible-thumping morality was going "out."

But even though the idea of tolerance was in the air, the reality was different: The Coral Reef Club was Ottawa's only gay bar. And initially, it was gay on Wednes-days only.

The Reef opened up in 1967. Located at 30 Nicholas Street, under Rideau Centre, it started off as a Caribbean club. But when it changed its Wednesday line-up to target gays, it became a hit and soon became exclusively a gay bar until its 2000 closing.

But even when it opened as a gay bar, the Coral Reef still treated its customers as second-class citizens. When the club deigned to allow gays entry on Wednesday nights, rules were tightly enforced against the community. Especially the drag performers.

Not long after, in 1967, Ottawa got its first gay bar, the Coral Reef. In keeping with the necessarily furtive nature of the queer community at this time, the Coral Reef was challenging for the uninitiated to find: it was in the basement of a parking garage, behind an unmarked door.  While photos show an unassuming space, it was tremendously important and popular in its time, hosting extravagant drag shows that brought the queer community together.

The Canadian War on Queers also has this brief description of the Coral Reef:

THE CORAL REEF: The Coral Reef opened its doors in 1968 and closed them in 2000. Primarily a mixed queer bar, on Friday nights it catered exclusively to lesbians. The Coral Reef (affectionately known as the Oral Grief) was also famous for its drag shows. The Reef was in the basement of the Rideau Centre's parking garage at 30 Nicholas Street.

Posted by ANONYMOUS at 9:46 PM No comments:

Closed: Hotel severely damaged by fire in 1887 and closed. Demolished in 1891 and rebuilt on the same site.

In an 1885 publication including St. Louis business cards, we find the following advertisement:


THE FINEST RESTAURANT IN THE WEST.
Is undoubtedly the Planters' House Ladies Restaurant. The MESSRS. GERARDI, Proprietors of the Planters' House, have taken special pride in furnishing it. It is exclusively for ladies, or ladies and their escorts. Ladies when alone feel entirely "at home" here, as they, perhaps, do not at any other restaurant in the city, and when on shopping tours from the suburbs find this a most desirable place. Try our strawberry shortcake and other delicacies.

Here we see a lot of common themes with women's spaces that bear mentioning.

First, is that the space is under the proprietorship (control) of men, not women. Women's spaces that are under the ownership, control, and/or management of women are a comparative historical rarity.

Second, this is not "exclusively" a women's space but is basically "coed"--this despite the name and the (deliberately) confusing use of the word "exclusively." How often do we see similar gas lighting and obfuscation around so-called women's spaces to this day?

This is in contrast to the hotel bar and other dining areas which were most likely reserved exclusively for men.

As we see again and again, the "ladies restaurant" is not just for ladies. It is (presumably) for ladies and their escorts, though we have also seen many examples where men who were not in the company of ladies tried to crash the place (see this example from Boston). Or men who seemed to somehow manage to dominate the "ladies café" anyway despite the so-called restrictions (see this complaint from a New York City lady and this analysis of a Chicago hotel ladies café.) Again, we see echoes of this in customer reviews for "lesbian bars" where reviewers note more men than women present. 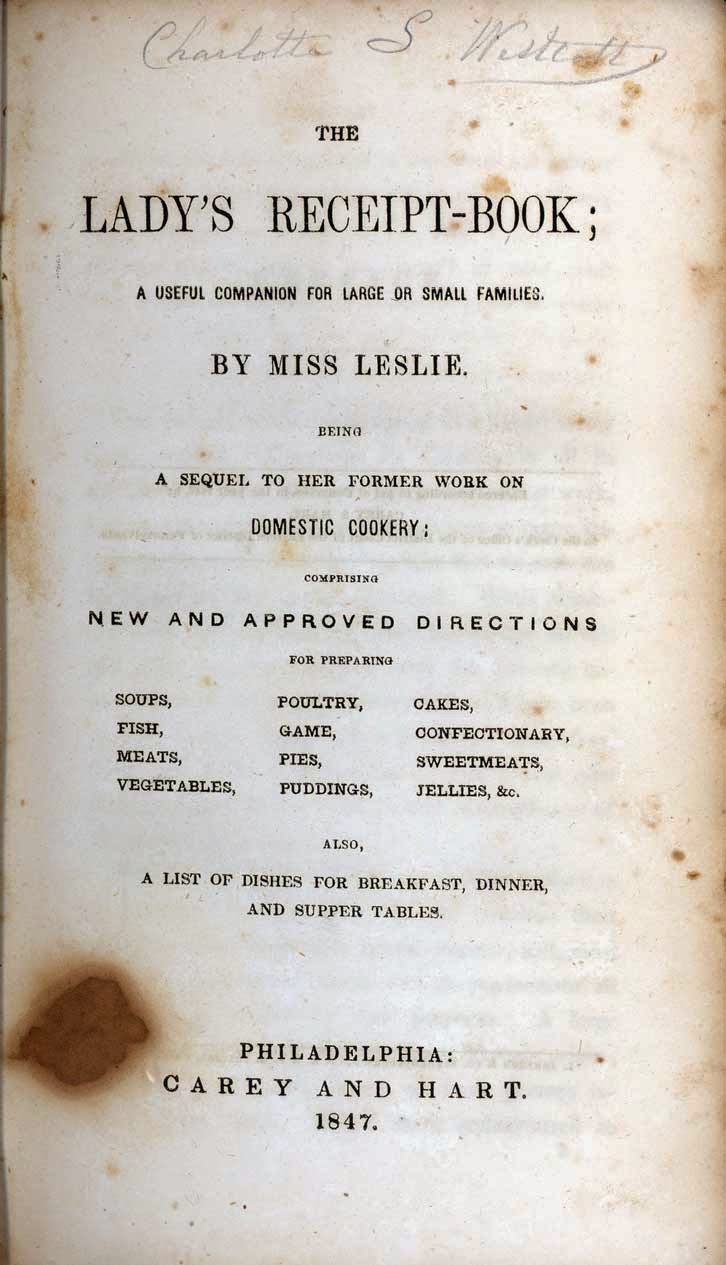 And third, notice the subtle acknowledgement of how women, especially women alone, are threatened by men in public spaces including eating and drinking establishments. Though the emphasis is shifted away from women's realistic perception of danger to one of psychology (i.e. of "feeling" comfortable or "at home" here--as if this were a familiar women's domestic space, and not the men's public realm.)

In this history of the Planter's House (or Planter's Hotel), we're told that the hotel built after the 1887 fire also included a ladies dining room:

The main restaurant was considered the most elegant room in the city. It had many Doric columns and was decorated in tones of Empire green and silver. The hotel offered other elegant public rooms — the ladies' dining room, a sumptuous Moorish room, and various meeting and banquet rooms were much admired.

Posted by ANONYMOUS at 8:54 PM No comments:

Though the Fayetteville Female Seminary may not have been progressive in every way, it appears that Miss Sophia Sawyer was very principled when it came to equal opportunity for her students.  From the Fayetteville, Arkansas site:

﻿﻿﻿﻿﻿﻿
It [the Fayetteville Female Seminary] was founded by Miss Sophia Sawyer, a missionary teacher who had worked with the Cherokees in Georgia and then in the Indian Territory that would one day become Oklahoma. A private tutor for the Ridge family, she first came with them to Missouri and the Indian Territory, and then after John Ridge was killed, she came here with John's widow, Sarah.

David and Jane Walker gave the land for Miss Sawyer to open her new school. Miss Sawyer was very religious and apparently quite the taskmaster, but she adamantly insisted on teaching young girls regardless if they were white or Cherokee and by 1854 there were 103 students.

She was once confronted by the Georgia militia for teaching African-American slave children of the Cherokees to read. She told them in no uncertain terms to go away, saying she was not subject to Georgia law since she was in Indian Territory and that the Cherokees were too civilized to have such a law.

The school catered to young ladies of distinguished families from all over the region, and offered classes in music, literature, French, and embroidery. The seminary was one of the most influential institutions in early Arkansas, and is often mentioned as one of the factors leading to the location of the state's land-grant university, the University of Arkansas. One of the music teachers was Ferdinand Zellner, a Prussian violinist with P.T. Barnum's nationwide tour of the Swedish Nightingale, Jenny Lind. In 1856 he composed and published "The Fayetteville Polka", and later went on to conduct the San Francisco Symphony.

In spite of their best efforts to save them, the school buildings were also burned in the Civil War and the school never recovered.

See more about the life of Sophia Sawyer here.

Posted by ANONYMOUS at 9:39 PM No comments:

Here's the description from Joonbug:

There's this from a general list of NYC bars:


It's on a June 1995 list of gay and lesbian bars in NYC, so we know it existed at least as early as the mid 90s. Notice the different address:

And this is what they say at a site called GoPlanIt:

Lesbian bars being few and far between in New York City, Julie's lounge can guarantee a pretty good crowd most nights. In fact it was successful enough to move to this larger location recently, not far from their original spot. This is not exactly white-hot as pick-up joints go, but it is a relax...

We know it was open as late as April 2004, as it was suggested to somebody looking for cafes/bars for women "around midtown or elsewhere" at a site called Chow:

A similar question at Yahoo Answers got this response:

When you think of Julie's, think pastels and suburban living. This diminutive bar, which could double for a Holiday Inn lounge near an airport, is where midtown office managers stop for a drink before the trek home to New Jersey. 204 E. 58th St. Tel: 212-688-1294.

204 East 58th Street has been Mia Dona and the Land of Plenty, a Chinese Restaurant.

Posted by ANONYMOUS at 8:46 PM No comments: