Like all new business owners, the mothers of Eden Lounge had great hopes for their new venture. Here's the "birth announcement" from dallasvoice:

Making a mad dash from the front door to the bar and back again, Lauren Nguyen frantically converses with guests and staff as the grand opening of Eden Lounge commences.

Not in several years has Deep Ellum had an LGBT bar. The new lesbian bar, Eden Lounge, celebrated its grand opening Saturday, Jan. 26. Alongside Sue Ellen’s, Eden Lounge is only the second lesbian bar in Dallas.

Owner Lauren Nguyen, 43, a home mortgage lender, has transformed the shell of a building into a heavenly oasis.

A far cry from the location’s former occupant, Cantina Dallas, Eden Lounge has been revamped from head to toe. The only thing left over is a custom-welded, cowboy-and-cowgirl-silhouetted railing leading up to the rooftop, which happens to boast one of the coolest views in Deep Ellum.

Eden Lounge houses two bars, one downstairs and a rooftop bar, but it’s not exactly the dance-club atmosphere of Sue Ellen’s.

Catering mostly to women in their 30s and 40s, Eden Lounge is billed a place to relax and have a friendly conversation.

“I wanted it to be like you’re in your own backyard or living room, and that you could hear yourself talk — that was very important. Very laid back,” Nguyen explained.

Not since Jack’s Backyard in Oak Cliff has there been a documented lesbian-owned bar in Dallas.

Nguyen and Holman said they’re aiming to fill the void left by the closure of Jack’s Backyard in June 2011.

“She (Kathy Jack) really paved the way for us, and we thank her for that — for passing on the torch,” Holman said.

Nguyen said she didn’t want to bring in investors and dug deep into her life savings to open the bar.

“I didn’t want the headache or to lose people’s money,” Nguyen said. “I wanted to take a chance on my own.”

This is not Nguyen’s first business endeavor. She has previously co-owned two Asian restaurants.
She said she didn’t want the hassle of running a full service restaurant alongside a bar, although Eden Lounge still has a non-functional kitchen in the back — grease trap included.

Nguyen said there is an assortment of restaurants all over Deep Ellum, including Maracas Cocina Mexicana, which frequently sends over staff with platters of complimentary quesadillas for Eden Lounge guests.

Since the beginning of their venture, Nguyen and Holman said the Deep Ellum community has been nothing but accommodating and welcoming.

“I think we’re looking for a little more quality and diversity — you know — we don’t have a lot of balance. It’s a lot of the same thing. That’s something Eden brings to the table,” Annino said.

It’s not that Deep Ellum is a stranger to LGBT-related businesses. The LGBT-owned Leather Masters is a staple in the area.

Annino said there have also been places like Mark and Larry’s Stuff, the art shop Casa Mexicana and a coffee shop — all of which are now closed.

Customer reviews were mixed--as they nearly always are. From yelp, here is part of  a positive review from February 2014:

I always have a great time when I go to Eden Lounge. They have my favorite drinks - Ruby Red vodka and soda and Fireball on the rocks - always a bonus! The rooftop is definitely the highlight of the place...great patio with heat when its cold and sail shades if you are running from the sun. Friendly bar staff...always. Best owners - if you haven't met Kristi and Lauren, introduce yourself next time you are there. A big, heartfelt thank you to both of them for taking the time and putting in an incredible amount of energy and soul into a place created with us in mind!

LOVE Eden's Lounge. Fun place, great service all around. Rooftop patio is nice, great for a large group as well as the downstairs inside. The rooftop patio is also dog friendly. They do not serve food, but you can get food from restaurants just across the street.

But very quickly the place emptied out. From September 2013:

ugh....so we came here for a friend's birthday!! 1st time here & unless that dj gets better...that was my last time there!!! i hadn't been in this area in years b/c it was always so packed & too many drunken idiots!! i was very surprised to see how much of a ghost town it had become!!!

Umm, aside from the fact that this place plays shitty top 40's hits from two years ago, it's COMPLETELY EMPTY on a Saturday night. Shit music.... So shitty.

What went wrong? This negative review (reproduced in part) from April 2014 provides some clues:

Well, I was super exited to find out about another chick bar in Dallas. My partner and I go to Sue Ellen's but find the crowd to be too young and too, well, just too, meh...no class at Sue's at all. Sorry, but we like to have fun and drink and talk and dance, but the music at Sue's is too hip hop for us. Also, they can't mix a good drink for nothin'. We usually go and listen to live music, but that gets old after awhile. Most women that go to Sue's have all known each other forever and are not interested in meeting any new people and the young chicks seem to want to fight if you look at them the wrong way.

Anyway...onto Eden Lounge. We got dressed up and went on a Saturday night (two weeks ago) and after finding parking on the street we went in. The place was much smaller than the pictures I had seen on the website. Kinda of depressing. Pool table up front  some ladies playing pool, a few chicks sitting along the wall and their friends sitting across the way too big "coffee tables"...Music was soooo loud in such a small space you had to yell to be heard. Big screen TV's line the back wall above the banquets and play music videos that went along with the music that the really bad DJ was playing. Sorry, but they had a dude DJ in a chick bar, really?

In a relatively short time, it appears the gay men rushed in to take over the underutilized space and then the lesbians really stopped coming. From there, death was imminent. Again, from dallasvoice: 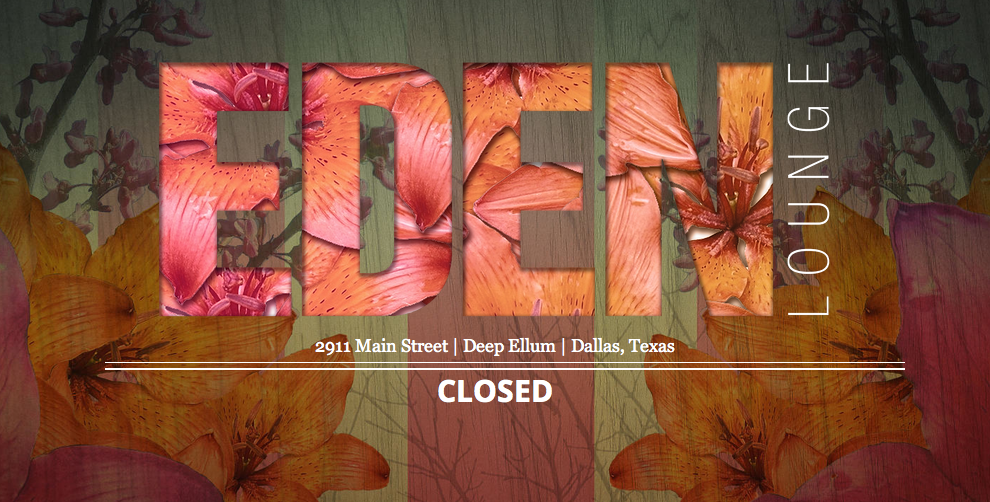 Posted by ANONYMOUS at 8:14 PM