It's kind of peculiar to find information about Parisian women's hotels in a Spencer, Iowa newspaper. But that's where this article showed up (though it originally ran in the New York Sun). From the Spencer Clay County News, March 21, 1907:

Another Home for Business Girls at
Low Prices Opened--Run at a Profit .

From the New York Sun

Another women's hotel of the cheaper sort has been opened in Paris. It is called La Villette and has been built and is to be managed by the Societe Philanthropique.

This is the society's third venture in the women's hotel line. The first was opened in 1902, with funds bequeathed by the Baroness Hirsch de Gereuth and Dr. Margolin. It was such a success that the society began a campaign for funds for the new enterprise.

The new hotel is of about the same size and cost about the same amount. The two Hirsch endowment buildings, on the opening day of the second, sheltered 217 women and young girls working for their living, including saleswomen, clerks, governesses, and holders of small government situations. It is said that even society women without escort have found shelter there for brief periods.

A special point is made of having the hotels nicely decorated and prettily furnished so that they may be attractive to young women for other reasons besides their moderate prices. They all have ample bathing facilities--not a common thing in cheap French lodgings--and roof gardens, where boarders can enjoy themselves in fine weather.

One of the larger rooms cost at the rate of 20 cents a night; one of the smaller ones 12 cents. A bath costs 4 cents, a douche 2 cents. In the restaurant the price of portions varies from 3 to 6 cents; the fullest meal that can be made up, including soup, meat, vegetables, and sweet bread and wine, foots up just 17 cents. 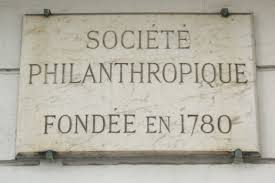 Both of the older hotels are not only paying their expenses: they are making money. The society hopes in a year or so to build another one.

The Societe Philanthropique still exists, and still provides housing for a wide variety of "people in difficulty"--everyone from seniors and persons with disabilities to students and "young workers" and "mothers and children in situations of rupture." There are around 20 residences in all.

But none of the housing today seems to be dedicated to young working women.
Posted by ANONYMOUS at 9:34 PM