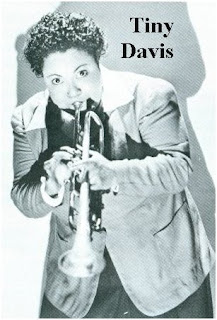 I first found out about Tiny and Ruby's here:

The trumpeter Ernestine “Tiny” Davis and her partner, the drummer Ruby Lucas, ran the 1950s lesbian bar Tiny and Ruby’s Gay Spot (2711 S. Wentworth Ave.); it was demolished to make way for the Dan Ryan Expressway.

Fortunately, there's more information than that. This brief bio on Tiny Davis is from Matt and Andrej Koymaski:

Little is known of Davis' early life and thus her career is where most get acquainted with her. In 1937, the Piney Woods Country Life School of Mississippi founded the 16-piece band known as "The International Sweethearts of Rhythm". The purpose of the band was to financially support the school, which educated the poor and orphaned black children in that state. But in 1941, the International Sweethearts of Rhythm severed their ties with the Piney Woods Country Life School, moved to Virginia and recruited seasoned professionals to join their band.
The International Sweethearts of Rhythm pushed the fevered audience to new levels as Edna Williams, Willie Mae Wong, and Ruby Lucas upped the ante on the song "Swing Shift." The Sweethearts were unique in that it was both all females as well as a racially integrated group. Latina, Asian, Caucasian, Black, Indian and Puerto Rican women came together and created music that more than held its own in the Swing Era: the musicians and the music they played was admired by their peers, including the likes of Count Basie and Louis Armstrong.

The International Sweethearts of Rhythm played big band jazz that cooks. The Jubilee Sessions, originally recorded for radio broadcasts aimed toward America's black soldiers serving during 1943 to 1946, provide a rare opportunity to hear these women play. The Sweethearts didn't get as much exposure to mainstream audiences in the South as the all-white, male big bands of their day because of their racial make-up and the atmosphere of violent racism in that region. When they did tour the Deep South, the three or four white women in the group would paint their faces dark so the police would not remove them from the bandstand and arrest them.

While their exposure to white audiences was somewhat limited, they were extremely popular with black audiences. The All-girl band singer Tiny Davis and her partner since 1948, Ruby Lucas, owned Tiny and Ruby's Gay Spot in Chicago during the 1950s. In 1988, a short film entitled Tiny & Ruby: Hell Divin' Women was made as a tribute to Davis, and her lesbian partner of 40 years, drummer Ruby Lucas.

Out and Proud in Chicago tells us a little more about the club itself.

IN THE 1950s, TRUMPETER TINY DAVIS AND PARTNER RUBY Lucas opened "Tiny and Ruby's Gay Spot" at 2711 S. Wentworth Ave.--"light, white, brown, and yellow," the femmes and the daddies all came to see Tiny use her tongue "like Pops, and better than Bix." Tiny had been a star performer with a wartime all-girl band, the International Sweethearts of Rhythm. A 1986 documentary, Tiny & Ruby--Hell Divin' Women, profiled the couple. Ruby was Tiny's partner for 40 years and was herself a drummer and pianist.

From Florence Hamlish Levinsohn, we further discover that their decision to open the club was due to the disappearance of post-war work for women jazz musicians:

After World War II, work for women became scarce, and women musicians were not immune. Tiny and Ruby decided to establish a permanent gig for themselves, and in the early 50s they opened a club, Tiny and Ruby's Gay Spot, on South Wentworth Avenue. After their property went to the city for the Dan Ryan Expressway in 1958, the two women went back to playing other people's clubs. They played at Big Mike's in Old Town, the Brass Rail in the Loop, and other clubs in and around Chicago until Tiny's arthritis put them out of business.

And check out this clip of the International Sweethearts of Rhythm from 1946. Wonder who the sax soloist is. I'm totally smitten....
Posted by ANONYMOUS at 3:38 PM