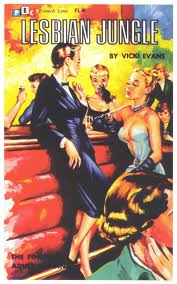 Up until now, I've never posted on a lesbian bar unless I had at least a name. An actual street address is useful too, but sometimes a girl just can't get too picky. Especially when it comes to tracking down herstory, which can be very elusive indeed.

In this case, all I have is a rather lurid account by a gay man who went to Syracuse University back in the 1950s. In his internet memoirs, he mentions a couple of Syracuse bars from that era. One was the Orange, a mostly straight bar near campus where gay men sometimes congregated (cautiously). Then there were two downtown gay men's bars: Bersani's, a "dark, sleezy dive," and the Bell Room. That leads us to our mysterious, unnamed lesbian bar....

There was a third gay bar in town, a private "club" on the main drag that had all the appearance of having been a speakeasy or gambling club at one time.  The entrance was a metal door between two stores; when you opened it you were faced with a long flight of metal stairs, at the top of which was another metal door with a shuttered peep hole.  Opening the door downstairs tripped a buzzer as I recall, but in any case just walking up the metal stairs was announcement enough and the shutter snapped open and your approach was watched by a pair of hard, dark eyes.  These belonged to Rose, a huge Italian-American bull dyke, who was always dressed in flower print house dresses.

The place deserved to have been recorded by a Toulouse-Lautrec, but one with a good dash of Georg Grosz in his temperament, perhaps.

The majority of its customers were working class lesbians, a group of whom worked in commercial laundries - and these were women not to be trifled with.  There were gay men too, a somewhat more varied assortment: some of the “flamers” from Bersani's, a few from the other bar and the occasional odd ones - like a couple or three wide-eyed college students, or some polished-looking slightly older guy with a professional job.

The first time I was there was when the little group of us from the Orange went downtown, and I was introduced to the city gay bars.  However, later on Reg and I went back by ourselves.  He got involved in a flirtation with the bartender, and I got to know the dykes.  Just how that began I can't remember, but after a while I was dancing with them - even little Dotty, who was Rose the Doorman's woman.  Dottie was often out of it.  I think working a hard manual labor job all day long and then trying to booze and stay up with Rose on her job was more than she could handle.  She usually dressed in jeans and a pea jacket, and often ended up collapsing into sleep in a booth.   A few times I saw Rose watching her from her post by the door, then come lumbering over in her huge flower print dress to bend over and literally lift Dotty out of the booth with both hands and hold her up like a doll.  She covered her with kisses, Dotty would briefly come to and smile, then Rose would plunk her back down in the booth and to sleep again.

I don't know if the place was licensed or not, but it did serve hooch after hours.  I saw two uniformed cops come into the place one night (scared the piss out of me) and they went into the kitchen with Jimmy [the bartender].  They came out very soon with a couple of small paper bags.  Sometime later Jimmy told Reg and I that the cops came in for "lettuce sandwiches."  Huh?  Sandwiches from a non-working kitchen?  Oh, right..."lettuce."
Posted by ANONYMOUS at 9:30 PM