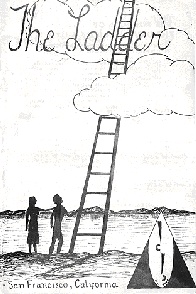 "The Lesbian Bar" (1976) by Tammy Manning
At Lost Womyn's Space, I usually limit myself to documenting lost spaces that existed in a specific time and physical geography. But I made an exception for this charming piece first-person account of a lesbian bar that originally appeared in The Ladder, a magazine produced by the Daughters of Bilitis, an early lesbian advocacy group. And though the lesbian bar in this piece is not identified by name, it appears to have been located on Broadway in San Francisco. At any rate, it certainly evokes a lost era.

I had never been to a lesbian bar before. Gay discoteques certainly--in most cities (Paris, New York, Boston, San Francisco, London). They have the best music--but Lesbian bars are rare. This one was up the street on Broadway--one block up from Carol Doda's with her red neon tits, past the Exotic lady wrestlers, City Lights Bookstore--across the street from the Chinese bookstore.

It is a small place--quite inconspicuous. I am with two girlfriends, the girl at the entrance tells us the entrance fee is two dollars. When we hesitate she says--How about one dollar--we pay and go in. There are about two men in the place and thirty or more women. One of the men sits quietly at the bar, the other sits in a corner table--by the pool table overlooking the dance floor. My first impression is that I am in a room full of tomboys.

We sit down at one of the tables to watch the show--an all woman rock band. There is a very masculine looking woman playing the electric guitar. She has a yellow pompadour, Billy Holly--slicked back and a tattoo on her arm. The drummer is tall and thin--curly-headed Afro--wearing a Playboy shirt, and western cowboy boots--she looks like an English rock star in spite of the simplicity of her dress.

The singer is dressed in a tight fitting red satin pant suit. Middle-aged, heavily made up--she takes the microphone and goes around singing from table to table--Las Vegas style. I look around at the people. Everybody seems to be in an excellent humor--the atmosphere is one of affection and gaiety. No overt displays of sexuality--a couple holding hands--or with their arms around each other.

Sleeveless white t-shirts seems to be their favorite attire and boys' sneakers--No one is wearing a dress.

The band plays a song from Stevie Wonder--couples get up to dance. One girl looks like Prudence Pimpleton -- Fearless Fosdick's girlfriend. Very square jaw and a scar on her cheek. A girl with bangs, tight white turtleneck dressed in the style of the bohemian '50s is dancing with another waistless girl in a green polyester shirt and a Jimmy Carter (southern liberal) haircut. She dances around him, wrinkles up her nose--gives him an Eskimo kiss.

I am attracted by two girls across the floor. One Swedish looking blond in a leather vest and no shirt and her friend who has her arm around her. She is round faced and curly headed. I go up and ask the curly headed girl to dance.

A plump girl in white--with a white cap comes up to me and asks me what I'm smoking.

"No thanks. I tried smoking those last year in Mexico--but the whole time I was dying for a Marlboro."

She goes off to move a piano--she's in the next group.

The whole place starts singing the words to an old popular song.

Two black men come in--I hear them say -- "Do you know what kind of a place this is?" Pimps they look like. They leave.

Every five minutes another girl comes around to empty out our ashtray.

Jody is self-conscious--too self-conscious to walk across the floor and go to the bathroom. I tease her. She waits until the floor is crowded.
Posted by ANONYMOUS at 12:31 PM