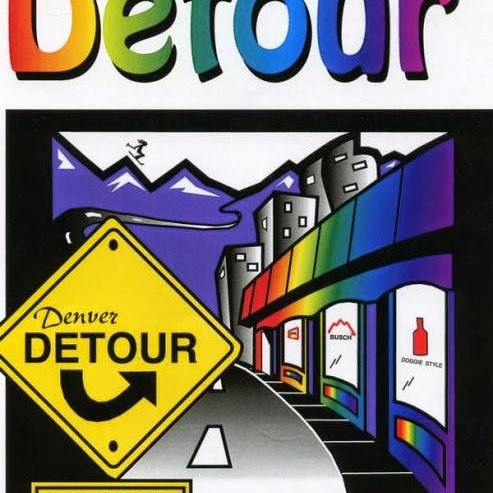 Here is the description from Clubfly:

Longtime devotee to the community
Lesbian owned and operated, Detour offers both male and female night. The food is great from burritos to prime rib.

At the same site, GandM weighed in with a positive review in November 2008:

I would first like to say that I have been going to the Detour for over 17 years, I have known the owner for quite some time, and she and her staff have always been very freindly, the food has gone through some changes latley because of the new locations, but I am sure that will be better than it has ever been. Although I do have some favorites, Please try the Chili Rellenos, the California Club, and the Burgers. They also now have 2 Big screen TV's a screened patio, multiple pool tables, pool tournements and Darts. If you are a board games person, ask, I am sure there is something there to keep you happy. the topper, they are now having open mic nights, live bands, and Karaoke.


But of course we had to have at least one review from the Pissed Off Guy who just couldn't figure out whey the Chicks Weren't Falling All Over Him at A Lesbian Bar. Totally classic. From Anth0ne in January 2008:
A Male Perspective.

Men, really, it's not a place you'll want to hang out at. You might hear they serve food, but go elsewhere, even to BK (better food IMHO!) then on to a bar that genuinely welcomes men. I have never been to a mostly men's bar that is as unwelcoming to women as this place seemed to be towards the few men that were in here when I visited. To the ladies that love this place and it's staff: I'm really glad you have a place where you are the majority and feel comfortable... but you really could be a bit nicer to the guys!
In my humble opinion, this merely illustrates why these sh**s should just stay away.
The opinions from the (apparently) lesbian reviewers are mostly positive, though there is at least one detractor. From nitemarelesbian in April 2007:
No Stuck Ups

If you want a very nice neighborhood bar. Close to everything downtown then you have to go to the tour. It's great. The people are fun. Everyone is very welcoming. Everyone at my work gay or straight love the food and atmosphere.
From LIKEIAMLESBIAN in May 2007:

say no to this dive !
Which drew a passionate response from OlderbeautifulLesbian in January 2007:
Response to "LIKEIAMLESBIAN"

For you information the Detour is a neighborhood bar that has for more than 20 years welcomed all people, not just the physically pretty ones. Further, just in case you haven't figured this out yet; Bars are where people go to drink, and where there is drinking there is always a little drama (aka "the free show") As for food, well the Detour does not claim to be some kind of high end, artsy fartsy, health food place. They serve good food that is generally well prepared, at a reasonable price, and if you're not happy with the food they will be glad to correct the problem. Finally, I find those "dirty looking street people" and "ugly lesbians" have a beauty that you will never understand. Get help, you have serious character flaws and you don't write worth shit!
In addition, there were two reviews which specifically praised the owners. From HAVINGFUNINDENVER in June 2007:
Jody b is great no matter what the haters on here say about her. I have been going here for a few years and have never had a problem with her at all. You have to understand sometimes she has to deal with drunks, nonpayers, arrogant drunks, etc... I like her and please don't pay attention to the bad reviews come hang out here and see for yourself. Sheila the owner is soooo cool i like her a lot she is a very nice person. The food by the way is excellent. The person who said it wasn't must have been tasting something on their upper lip instead of the meal.
And from Hottie32 in April 2007:
Yes Jodi, B, has her flaws but that is one of many characters to the establishment who less forgets the real supporters,non the less it like everything else has its chances and this is what makes the world go round. And i am greatful for the Detour!

There are a couple of reviews at Yelp as well. Only one openly acknowledges that this was a lesbian bar. Shiho F. From January 2007:

I have been to several gay bars but this was my first lesbian bar.  How am I supposed to tell the difference?   Anyways, we enjoyed fried vegies, macho nachos, hot wings, chicken fingers,  fish and chips and  lots of ranch.  I had a couple double Jack and Cokes to keep myself warm.  It was one of the few places open during our first real blizzard.  Good times.

Very friendly to all crowds.

I had a great time at this bar after I found the entrance located in the back (hence the Detour). Staff was extremely friendly and the drinks were flowing. The seating is surprisingly comfortable and informal for a bar. Highly recommended.

I honestly can't believe the ratings are this high. I have to say, the Detour is a total dump! Crap laying around everywhere and extremely dirty. And to boot, our 80's flashdance revival bartender was extremely rude. Had our one drink and moved on... Quickly!

And this is cool. The place even gets an (admittedly brief) mention in the New York Times. It was in an article on Denver's Colfax Avenue in November 2007:

Crime was never a worry for Sheila Keathley, who has owned a popular gay bar, the Denver Detour, on Colfax Avenue for 24 years. “People who live here understand that Colfax is just very different,” she said.

Several sites mention that the place is now closed, but no date is given. The last date for a review I can find is in 2009, so I'm guessing that Denver Detour must have closed around then.
Posted by ANONYMOUS at 7:29 PM